What is the True Essence of Sound?
A Visit to a Place Where Beautiful Sounds are Made 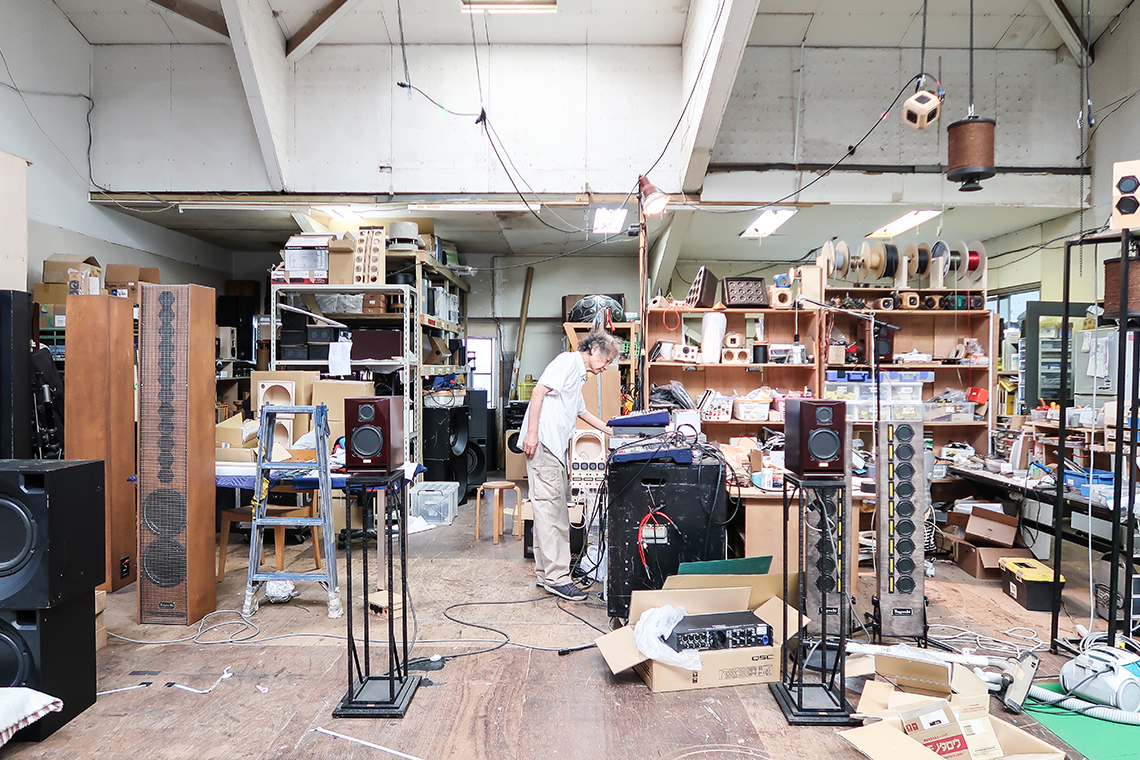 Sounds that come out of Taguchi Speakers flow easily and pleasantly into one’s ears. These speakers recreate invisible sounds in the most real way possible. When a sound is truly beautiful, it feels as if it reverberates not only in the back of one’s ears, but deep into the rib cage.

For our very first interview, we visited Taguchi Acoustic Laboratory Co., Ltd., the manufacturer of Taguchi Speakers, to ask about their work in making speakers as a way to explore the topic of “sound.” We paid a visit to their studio lined with rows of halfway-built speakers in Shin-Kiba to talk with them. 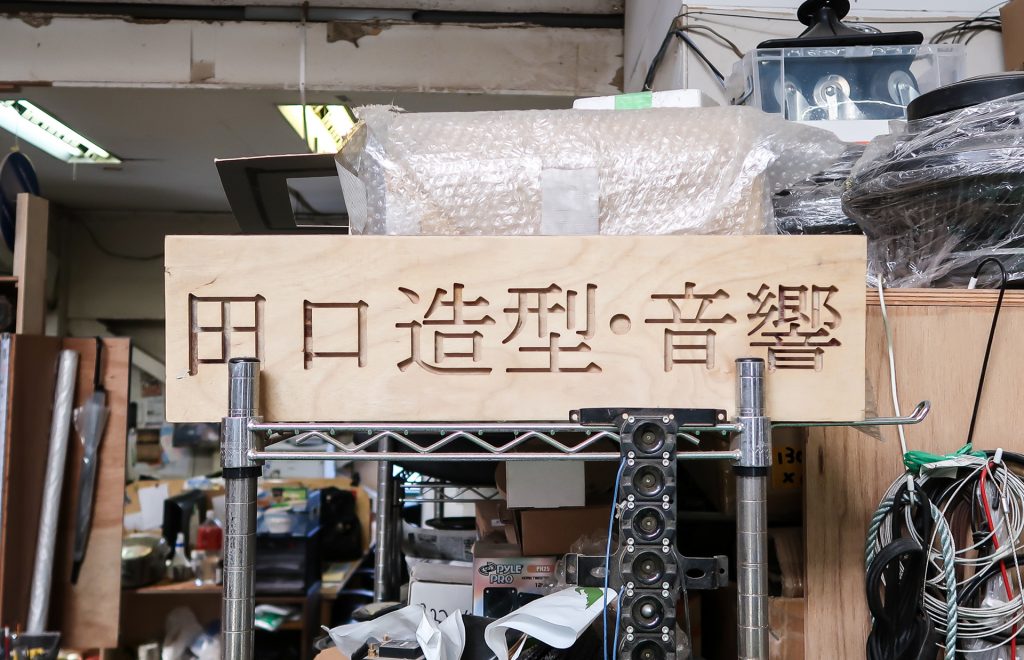 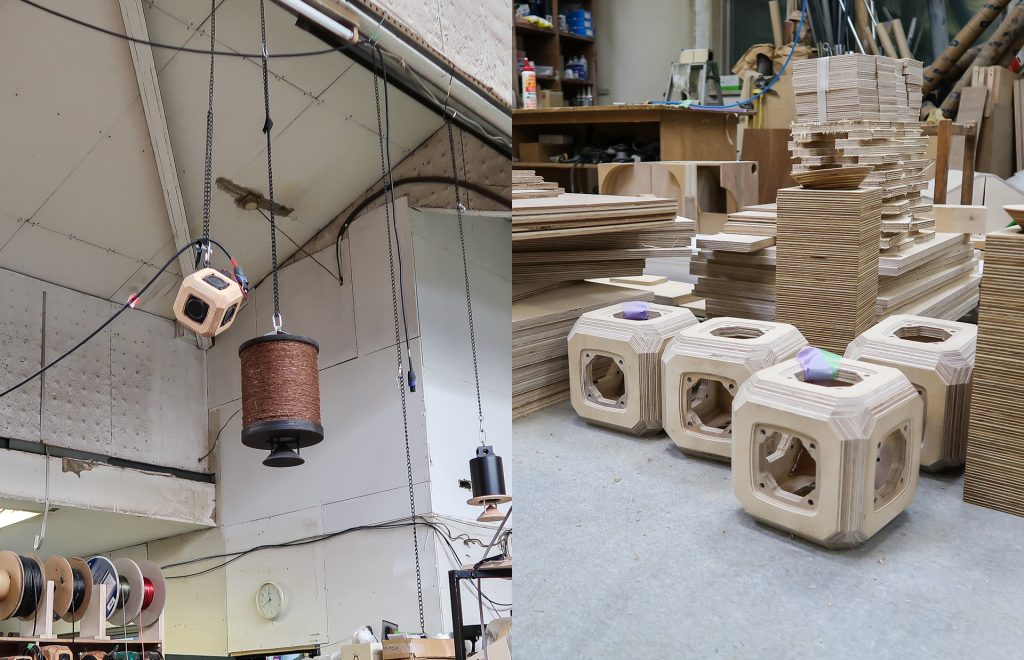 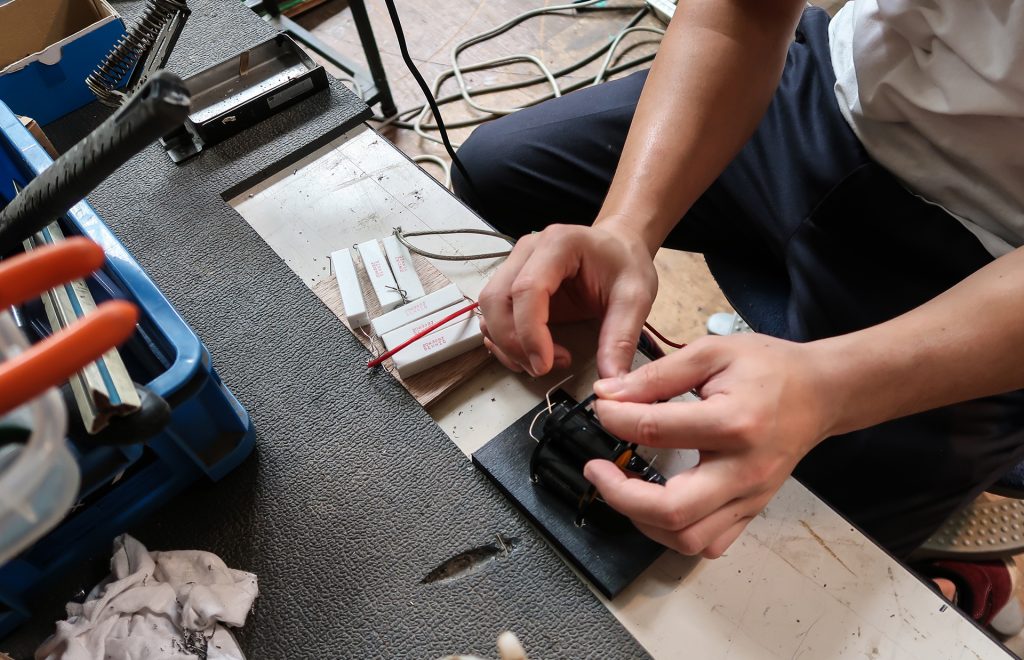 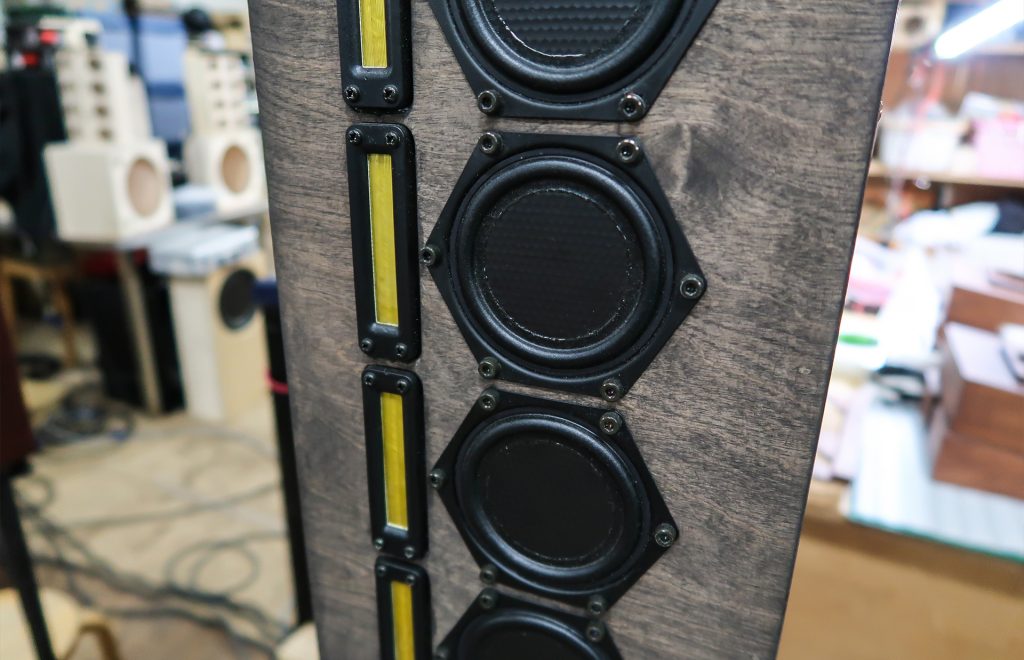 Kazunori Taguchi, the man behind the birth of Taguchi Speakers, is a sound engineer as well as somewhat of an artist. Having been raised in Kamakura, a place full of nature and culture, and through his fondness for the sounds of plucked string instruments, he developed his own unique set of sensibilities. Quite similar to the way one might savor the taste of his favorite in-season fruit, Taguchi spends his days working to figure out what good sound is. For someone like him, we wondered what his philosophy is regarding sounds and the product making process.

ー You have been working in the field that deals with sounds for many years.
To you, what exactly are sounds?

Taguchi：
You could say they’re the vibrations of the fundamental energies of the universe. In a similar way, you could say that because of our sun’s energy, the earth can carry out all the activities that it does, and it’s probably because of the vibrations that we humans are able to stay alive. What we basically do is to use those vibrations to create sounds. What we do as humans can’t even come close, but I feel that we should try to get as close to the laws of Mother Nature as possible. That’s why I am constantly learning the best possible ways, and this pursuit will never end. I want to keep getting closer and closer to perfection.

ー What kind of sound-making are you striving for?

Taguchi：
My job is to replicate and reproduce sounds. Speakers can be seen as “sound simulators,” and so I ask, “Are the sounds amplified through a mic truly made louder in a genuine way?” Even though the singer is singing at a distance, the voice constituents still remain. That is the kind of sounds we make.

I’m currently fixated on flat speakers. They are the newest and the most natural way to create honest sounds. With a flat surface, it is easy to create a straightforward wavefront, which in turn will come across as clean sounds.

Sounds are interesting in that regardless of whether you are an elderly person with physical disabilities or a young child, you can tell that a good sound sounds good. Just like delicious foods are simply delicious.

ー What are the things you consider important in the product making process (monozukuri)?

Taguchi：
You have to create products that you most love and that people will cherish as their lifelong partner, you know. I think humans have to keep becoming purer, and I want to persist in reaching toward that goal. For example, there are many audio enthusiasts out there who think that they can’t go wrong as long as they own famous overseas products or old, discontinued antique-like products. But that would be so boring, wouldn’t it? Shouldn’t we keep shedding layers and diving into worlds illuminated in new light? I believe that we have been able to create “made in Japan” products that we can boast about to the world. But we will evolve even further. I want people to get blown away by the sounds coming out of my speakers.

02 The SERENDIPITY Series: omnidirectional speakers that fit alongside one’s lifestyle

Originally, Taguchi Speakers had predominantly built made-to-order products for professional clients, but one day, something changed. Hikari Mutaguchi, who was working under Taniguchi (and is currently the director of WHITELIGHT. Ltd), developed speakers designed for general consumers called the SERENDIPITY Series. The launching of this series made Taguchi Speakers become widely known to the public. We asked Mr. Mutaguchi, who is the manager of this series, about the story behind the birth of these speakers.

ー The SERENDIPITY Series—what kind of speakers are they?

Mutaguchi：
It is the reconstruction of Mr. Taguchi’s theories and philosophy into the form of home-use speakers that suit the lifestyles of us urban dwellers. Because Mr. Taguchi is constantly making new things, there is never really any completion. I took Mr. Taguchi’s ideas that were on the verge of exploding, and squeezed and forced them into shape. For me, both the project itself and its process were extremely exciting and interesting. I would like to see them remain in this world as Taniguchi speakers that factory workers can keep making 10, 20, or even 100 years from now, like a tradition of beauty.

ー The speakers have such distinctive shapes. How do you decide on the designs and materials?

Mutaguchi：
Mr. Taguchi has been making speakers for a wide-range of purposes, like those used at Buddhist temples, for meteorological observation, and for noise control. We wanted our home-use speakers also to have the characteristics of the Taguchi brand, and this desire made us arrive at the idea of omnidirectional speakers. They are speakers based on the theory of point sound source, which is to let sounds reflect by such means as making the speaker multi-faceted or attaching conical reflectors so that listeners can hear sounds using the entire space they are in. The material we used is plywood made of birch from northern Europe. The use of plywood is key as it ensures uniformity in its density.

ー What kind of role would you like this product to serve its users?

Mutaguchi：
Not simply as a machine that plays back sounds, but rather, more like something that will support you at a spiritual level. Music changes according to the listeners’ environment and feelings, wouldn’t you agree? Although it’s not something that you use by actually touching it like a chair or desk, but I feel will exist alongside you more, much like a partner.

Taguchi is a man who never ceases to stop working as a leading sound professional. Mutaguchi developed a product that inherits Taguchi’s theories and spirit. There is a new challenge that these two men are currently tackling as a new possibility for sound, and it is called “forest of sounds.” The goal of this project is to manifest sounds as an expression of space using multiple channels and speakers. Taguchi and Tsukasa Miyamoto, a creator in acoustical engineering, are jointly developing an installation called Sympho Canvas, which uses 64 channels of sound sources and 64 speakers. Speaker technology is the key to evolution. In conclusion, we asked the two men about their take on the potentials for sounds.

ー What are your thoughts and ideas about the possibility for the “Forest of Sounds”?

Taguchi：
They normally say having two channels is enough, but we are currently using 64 channels. I want to keep creating more interesting realms. It could be something like a sound museum. It would be fun, though, if it’s more than simply about listening to music, but rather, if it’s something that is good for your spirit or brings healing in some way, like yoga. It would be neat if it was medically beneficial. I feel that if we keep exploring, we would be able to create a greater world.

Mutaguchi：
I believe that in the future, we will increasingly see new types of composers who create sounds for various spaces. But those people have a hard time thriving because the environment is lacking. I believe that it is the role, or the mission, of those of us who make the hardware like speakers to create such environments for them.

Sound system specialist that undertakes in Japan the entire process, from research and development to manufacturing, of speaker units and enclosures—the most important components of sound systems. Some of the major locations at which Taguchi speakers have been installed include the Nishi Hongwanji Temple, Omotesando Hills shopping complex, Blue Note Tokyo, the National Theatre of Japan, National Museum of Emerging Science and Innovation, Universal Studios Japan, all The North Face stores in Japan, and VENT Tokyo.

About The SERENDIPITY Series