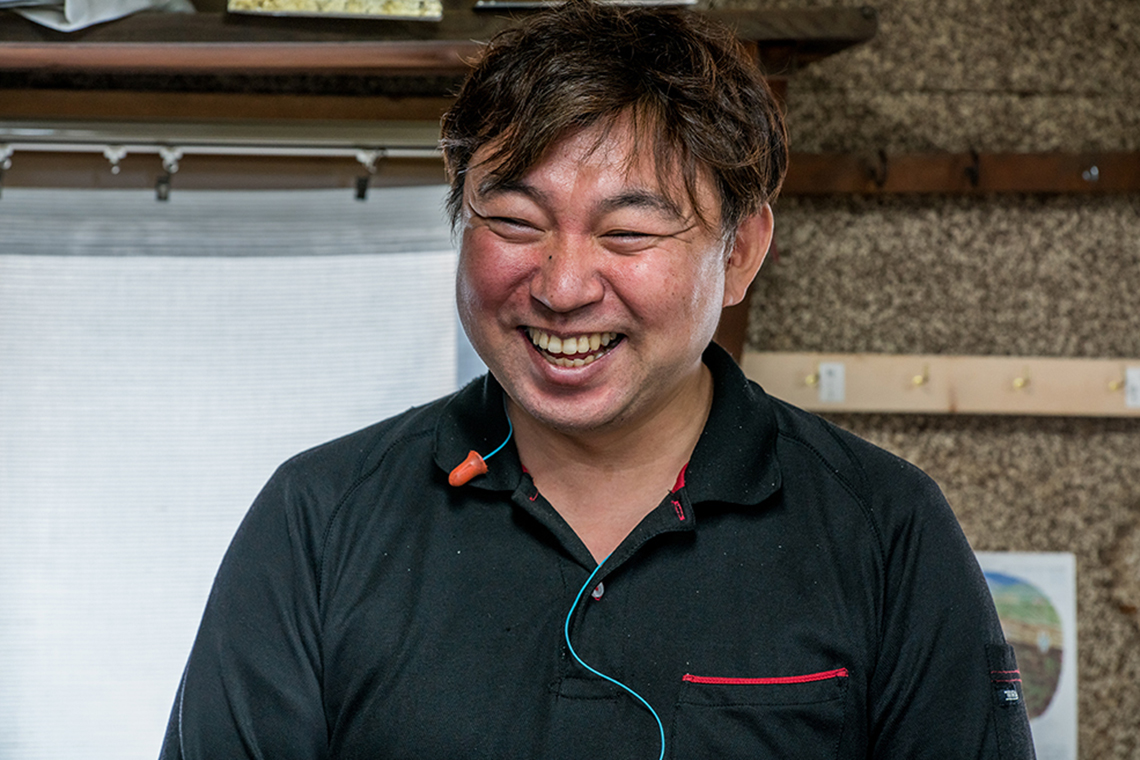 Our third interview is with Shimatani Shoryu Kobo, a studio where monozukuri is performed using a very simple technique of “hammering.” Drawing fully on the extensive tankin (hammered metalwork) skills that have been passed down for many generations, the studio engages in a wide range of work, from creating traditional Buddhist alter fittings to developing new craft products. We visited the studio located in Toyama Prefecture’s Takaoka City, an area known for the production of a traditional Japanese metalwork craft called Takaoka Doki. 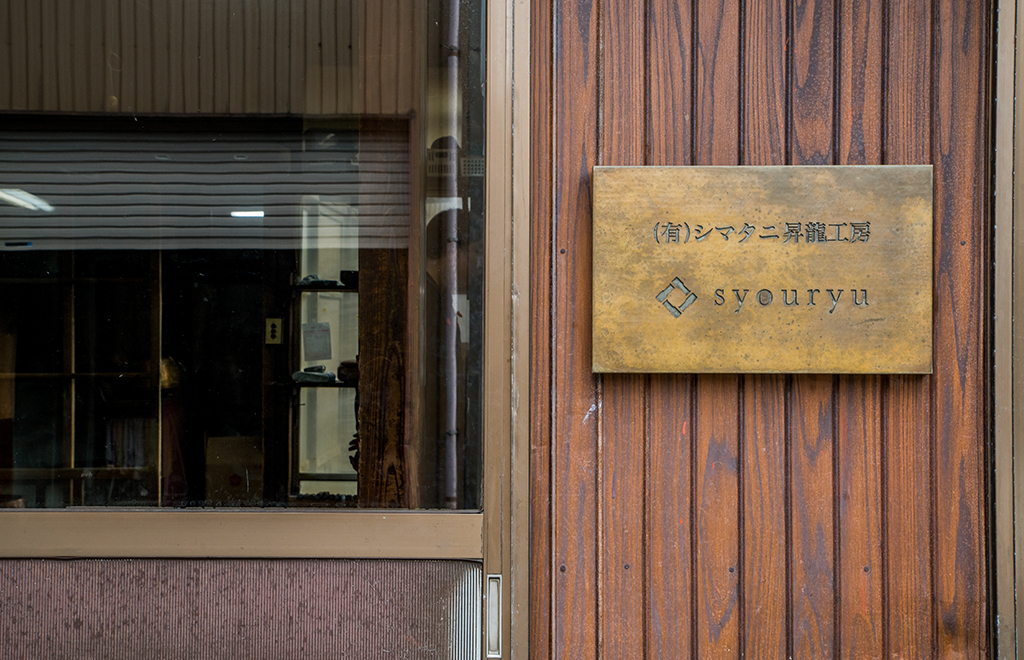 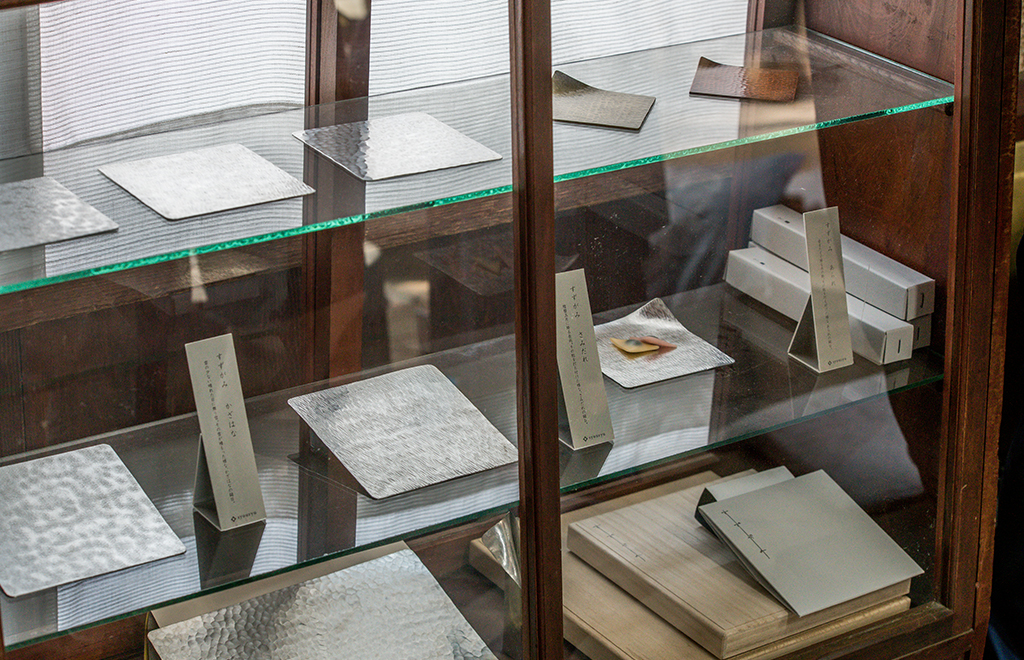 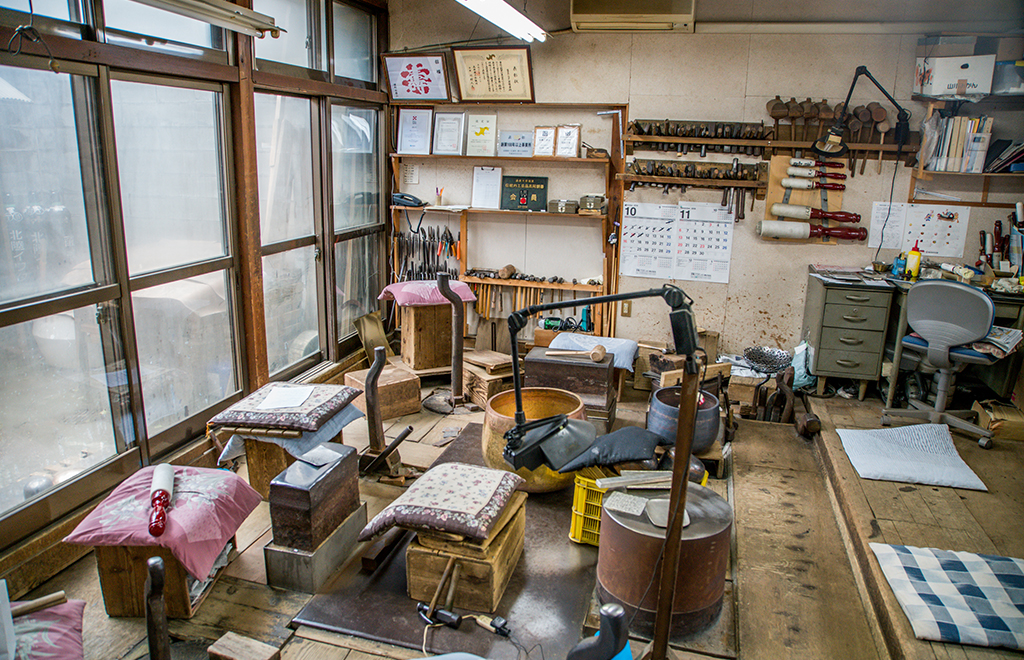 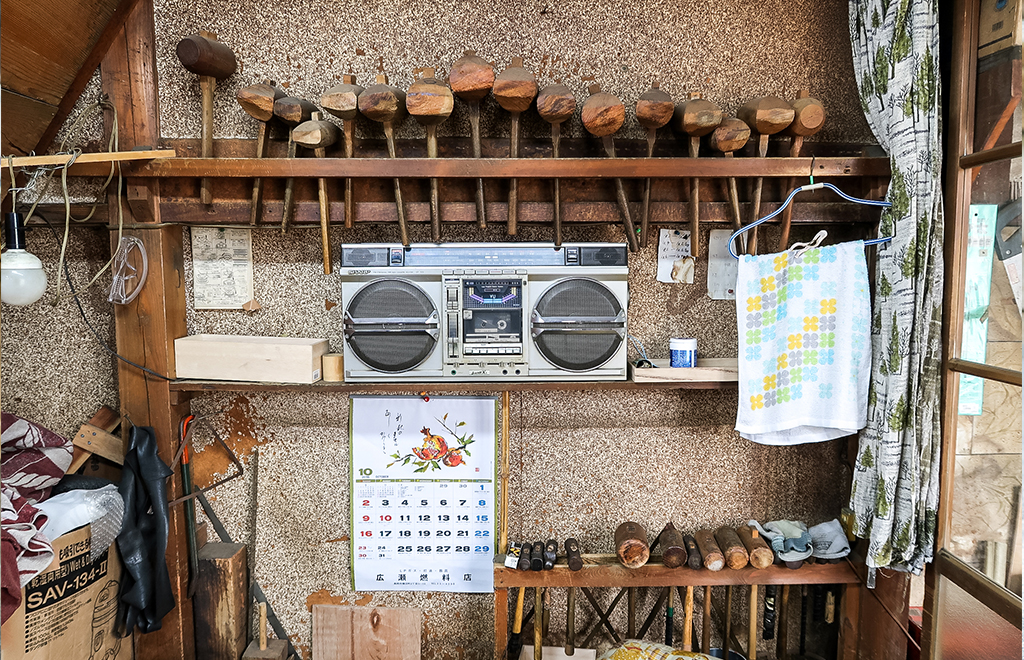 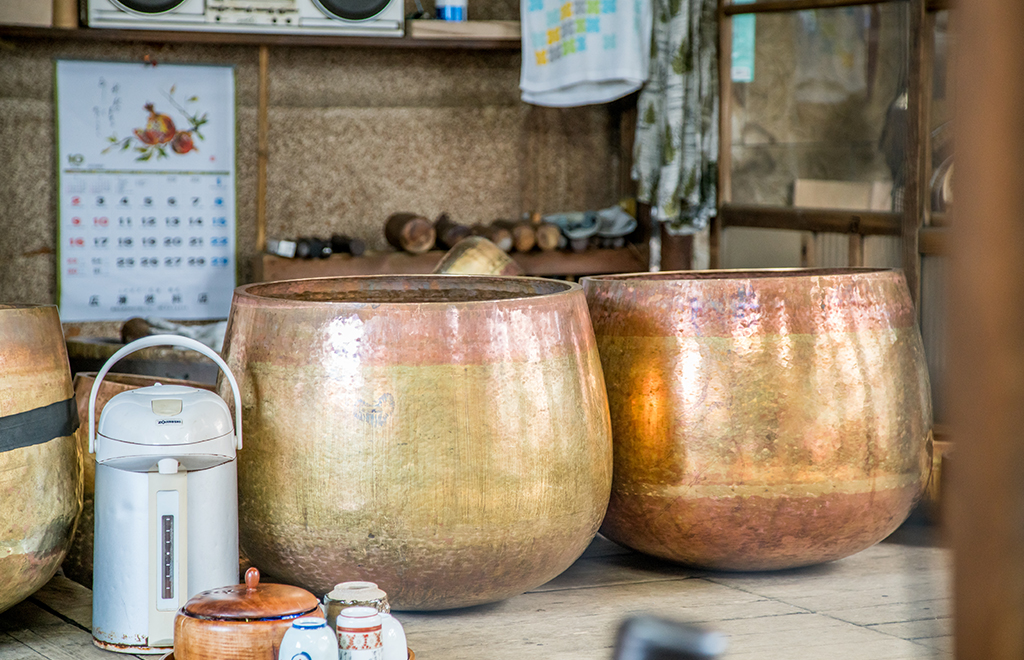 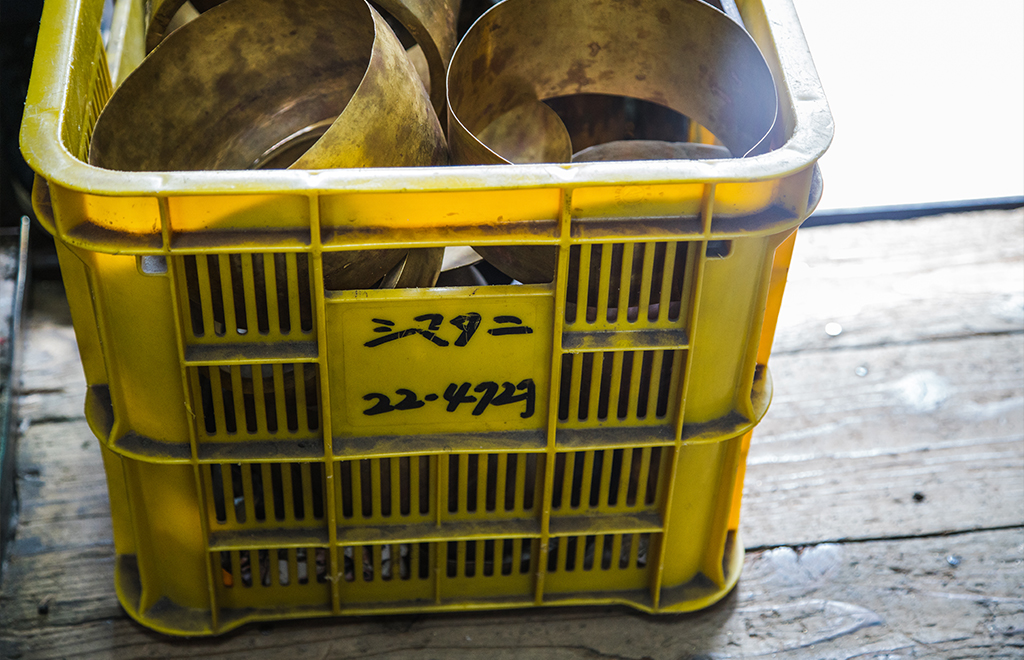 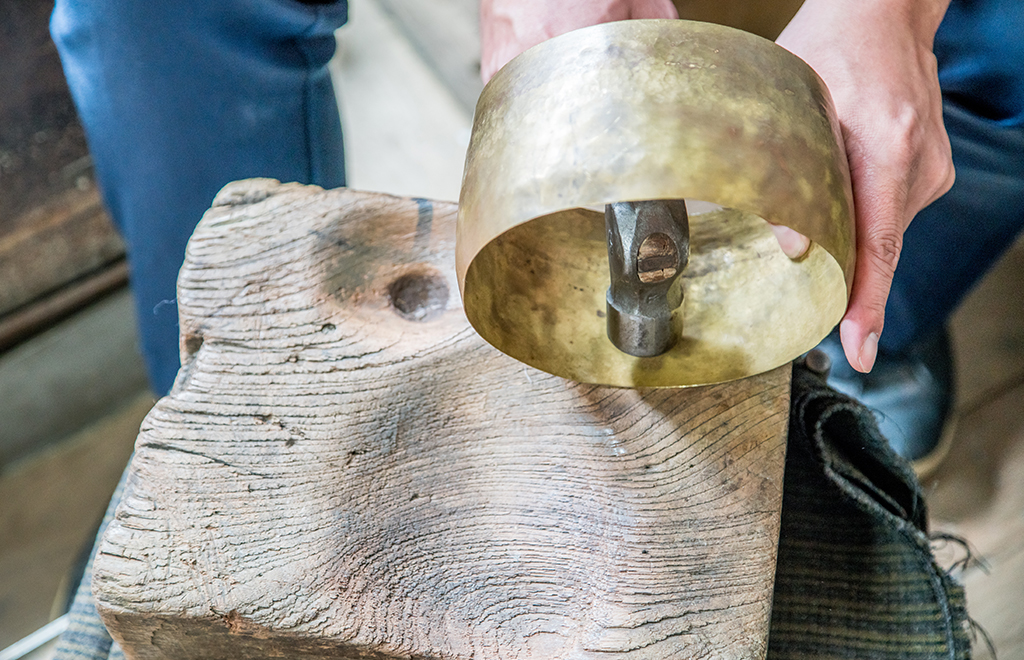 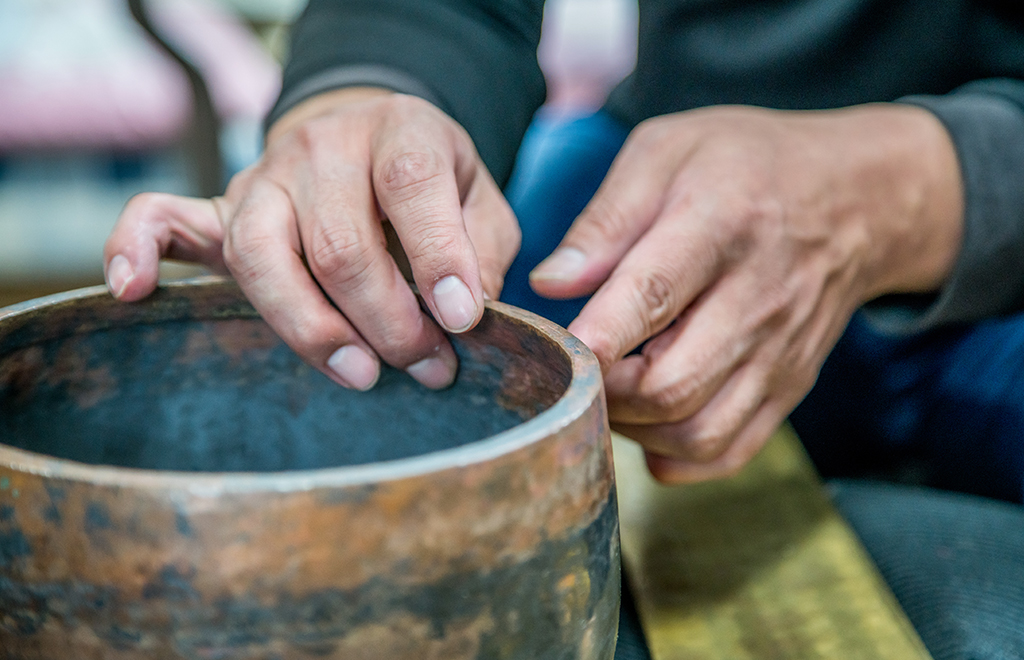 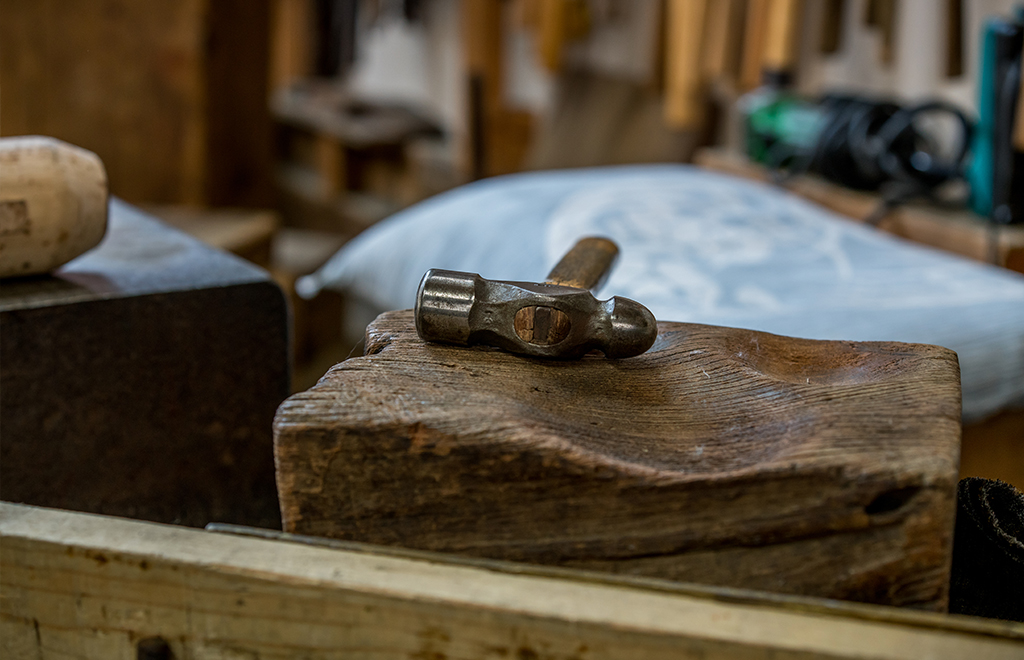 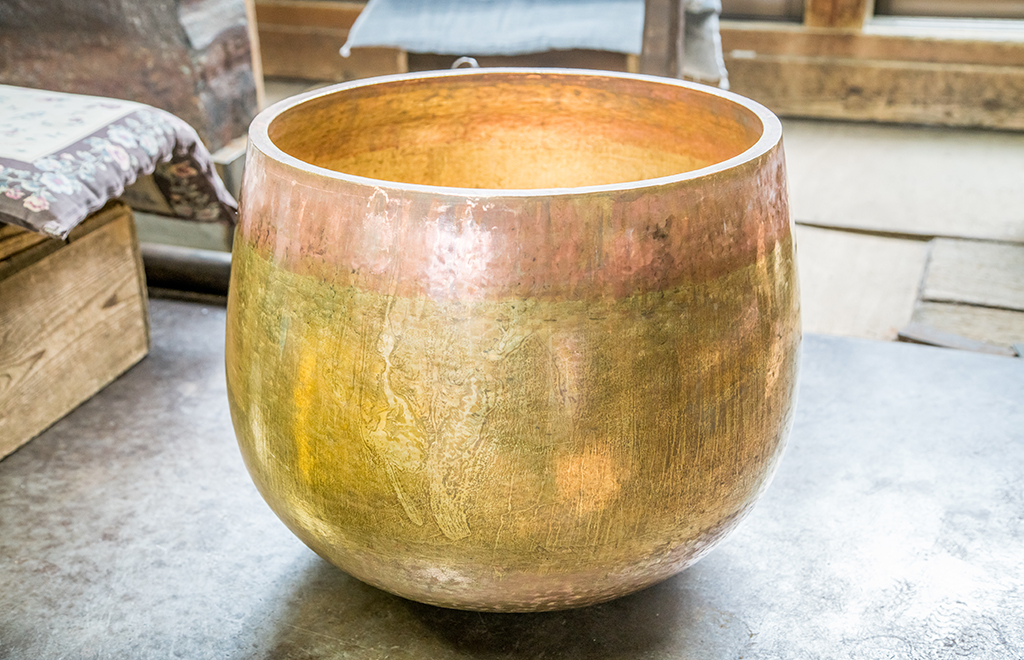 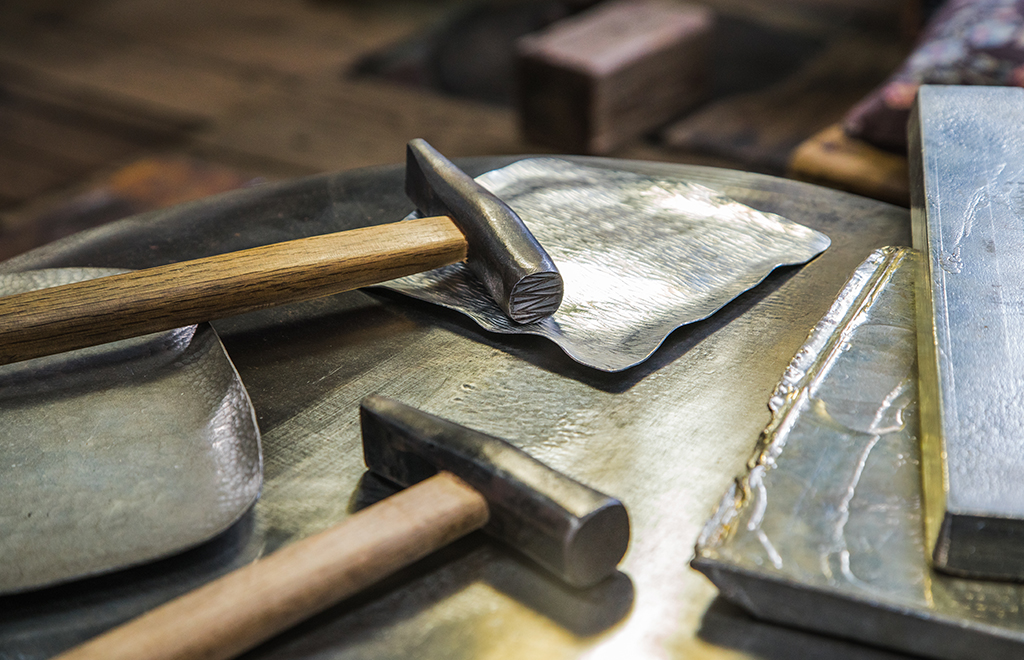 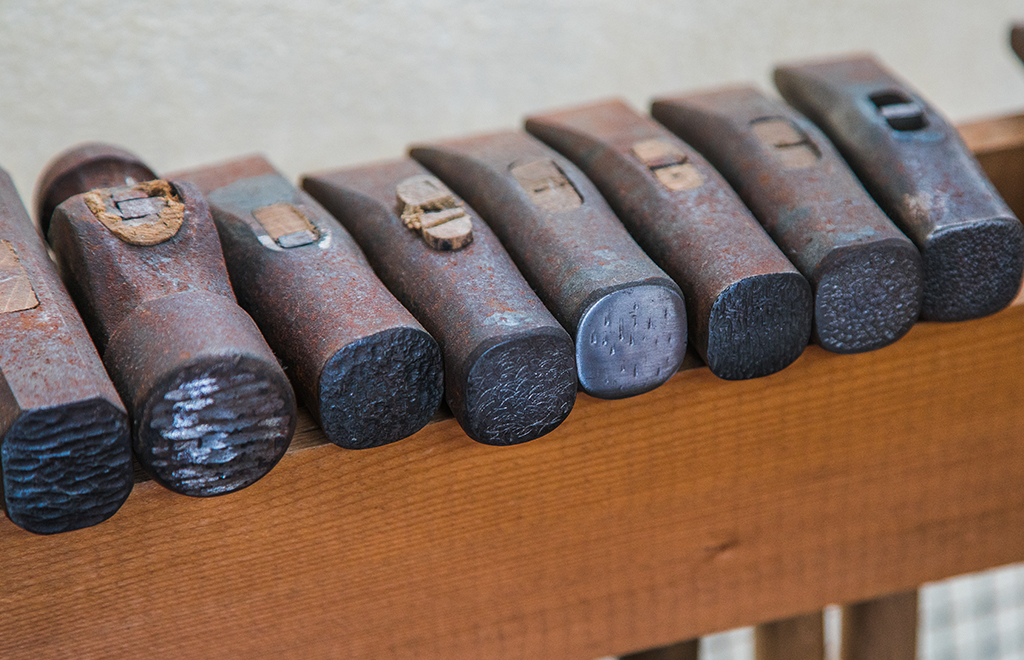 01 Technique of Tuning the Orin, Passed Down Through the Five Senses

Established in 1909, Shimatani Shoryu Kobo is a long-standing manufacturer of the orin (singing bowl), traditionally known as keisu*, used in Buddhist temples. Although the studio is located in a region with a thriving metalwork industry of imono (metal casting)**, this studio is a unique presence as it has, for over more than a century, made orin bowls by hand using the technique of tankin (metal hammering) ***. To make the orin, a brass plate is shaped through a repeated process of hammering and annealing, and tonal adjustments are made as a final step. After about three months of many-layered process carried out by hand, the bowl is finally completed. Yoshinori Shimatani, a man with a calm and gentle demeanor, is the fourth-generation successor of the family business. Today, as he does every day, he wears his favorite ear plugs and hammers away on this latest project. We asked him about the technique used to make the orin singing bowls.

ー Are you hammering to adjust the shape of the orin?

Shimatani：
All the work we put into shaping the metal is for the sake of the sound. As I hammer and tap on the orin to listen to the sounds it creates, I make decisions about how to shape it. As you can see here, I have a row of bowls of similar size, but each has a different shape. While I am working on each by hand, if I feel that a certain bowl would be best with a full, rounded sound, I will make it full and rounded. If I feel it would be better suited to have a sleek sound, I will make it sleek. Ultimately, I aim to create a soft tone quality.

ー Please tell us about the tones qualities of the orin

Shimatani：
The orin has three sounds: kan, otsu, and mon. The first sound of kan is the sound of a sharp strike that disappears quickly (“kaaan!”). Otsu is a slightly higher, vibrating tone (“waaaaahn”). The third is mon, which has a slower, billowing sound (“mohhhhhn”). While the kan sound can only be changed by adjusting the thickness at the top, we fine-tune the undulating sounds of otsu and mon. When we tune, we are making adjustments to slow down the undulation of the sound. We do this by tapping the thick rim at the top to listen to the sounds it makes. The thin part at the bottom is where the sounds are reverberated.

ー What is most challenging about the technique of making the orin?

Shimatani：
This technique of tuning its sounds is very difficult. There is a correct undulating pattern for every orin size. You cannot successfully tune unless all of these patterns are understood and learned within you. The first five years of my learning was spent just listening to my grandfather do the tuning, then for the next five or so years, I tried the tuning myself while having my grandfather or father check it for me. For the two years thereafter, I no longer needed to get any adjustments made. It’s after 12 years that the technique can finally be officially handed over. That is just how intensively an apprentice needs to be trained to fully master the technique. When I was little, I so hated being born into a family like this. But later, I felt that it would be such a shame to let this technique die out with my father’s generation, so I decided that I would work hard to inherit the craft for my generation and hope to pass it down to the next.

The Suzugami has a refined, elegant look and offers the kind of freedom much like playing with origami. It was developed through the innovation of traditional techniques. James W. Young said that “an idea is nothing more nor less than a new combination of elements,”* and the Suzugami is a precise example of this. An idea took on a form as a result of combining the craft of “hammering” that has been passed down the Shimatani family line with new elements. We asked about the story behind how this long-standing craftsmen’s studio that boasts a 100-year history came to develop this new traditional craft product.

* “A Technique for Producing Ideas” by James W. Young

ー Why did you, long-standing orin manufacturer, decide to develop the Suzugami?

Shimatani：
A single newly-made orin is something that lasts for about 100 years. Soon after the war, I hear there was great demand for the singing bowls, and this kept the business busy. But over the next 60 years, the demand was gradually met, and after that, the only demand that remains is for replacing the bowls that have become older than 100 years. By around 20 years ago when I inherited the business, the work of making orin had declined. Although it’s necessary to carry on the traditional techniques for making orin, doing just that was no longer enough to make a living. In Takaoka City, we have a Traditional Industries Association Youth Group, and all the members working in the traditional craft making industry were dealing with the same issue. Through the association, we participate in an annual exhibition, the goal of which is for members to develop new products befitting of the modern lifestyle and to showcase them at the exhibitions. The Suzugami was a product I made for this.

ー How did you come up with the idea of the Suzugami?

Nousaku, a company that had been making brass vases and such, was exhibiting products that looked like baskets made of tin. It all started when I saw this and it got me wondering if we might be able to make something by hammering tin. I had been thinking of ways of making thin plates for a long while, when in a split second of inspiration, I thought to myself, “It’ll be very thin, so why don’t I have it used just like origami? Sell them flat, and let the customers bend them in any way they please.” I really wanted to provide products that give the sense of warmth of handmade traditional crafts at prices that are as affordable as possible. For the Suzugami, tin is made into thin sheets by putting them through a rolling mill, then cut out into squares. These are then hammered with an arashi-zuchi*, a process which only takes about two minutes to complete. After doing as much subtraction and simplification as I could, the result I arrived at was the Suzugami.

*arashi-zuchi: a metalwork tool used to create an irregular texture on a metal surface. Hitting with it transfers the shape of the hammer onto the metal.

ー Please tell us the appeal of Suzugami

Shimatani：
The material is 100% tin. I don’t think there is any other metal that is as bendable as this as you use it. I think the great thing about the Suzugami is that it provides an element of surprise. It would be wonderful if it generated conversations like, “Let’s fold it this way today,” just by having it on the dining table. I hope to keep developing more artisan-made products, each hammered by hand, giving that sense of warmth that only handmade goods can provide. 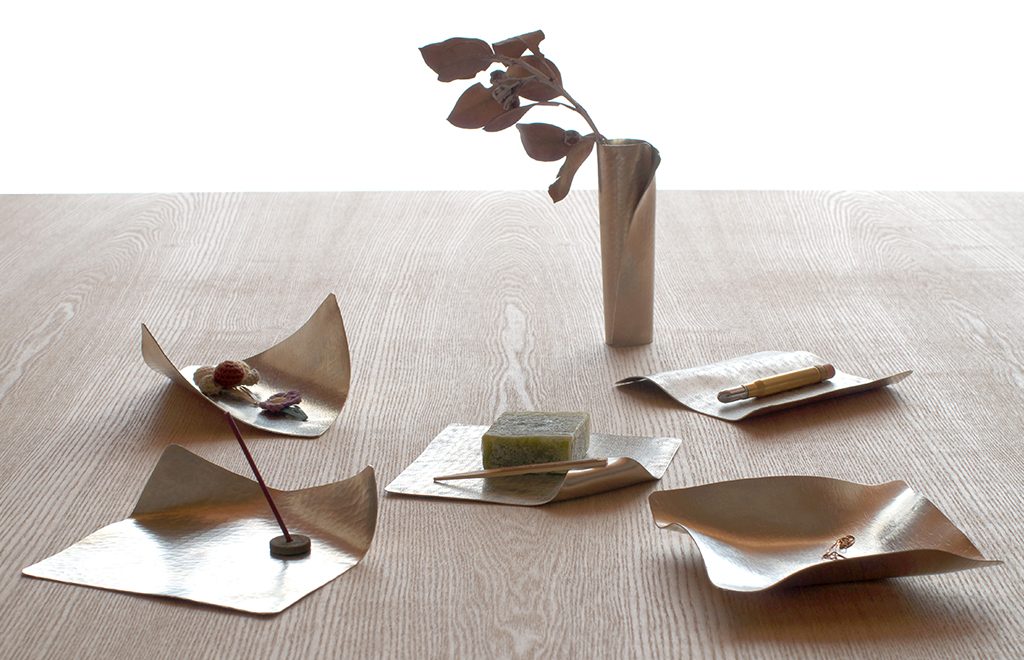 Shimatani Shoryu Kobo’s monozukuri is marked by flexible sensibilities, and at its foundation is the expertise of building the orin, which demands the use of all five sense. The Suzugami, born as a result of many trials and errors, has helped Shimatani, an artisan who works in the traditional industry, to discover a new kind of value in traditional craft products. By ingeniously uncovering the needs of the times without fearing change, he is finding ways to break through the current challenges faced by the traditional industry. In conclusion, we asked about the future of Takaoka Doki metalwork. 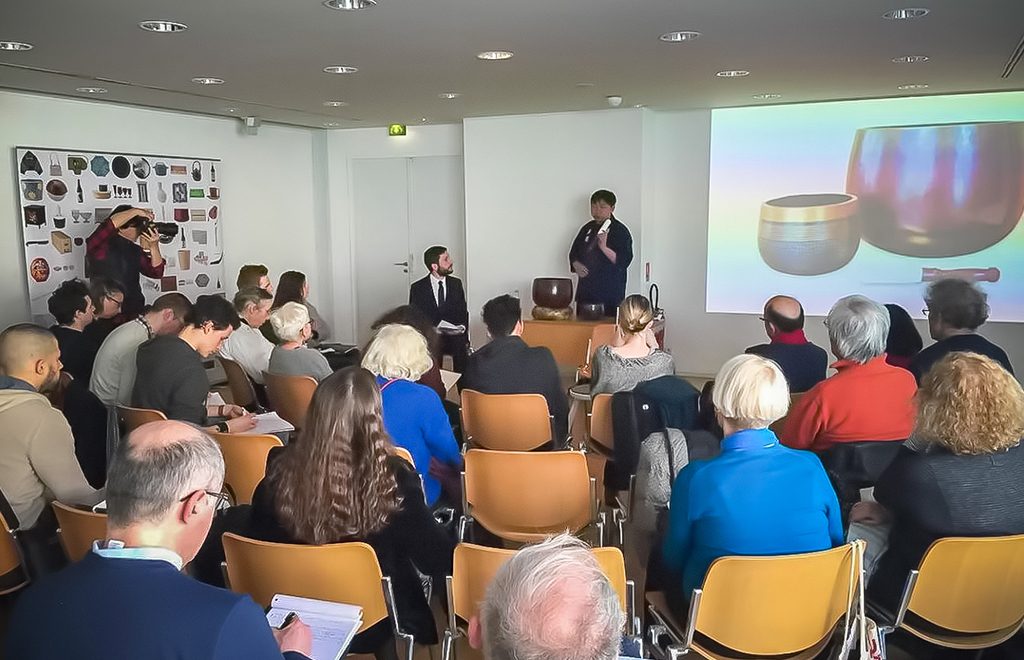 ー What are your views regarding future possibilities for Takaoka Doki?

Shimatani：
While we must continue to carry on, as “inheritance,” our techniques for making the orin, the reason that Takaoka Doki still exists is because new things were constantly being created through innovation. In fact, Takaoka Doki used to be Takaoka Tekki (“ironware”). They were making pots and caldrons, but because the demand for them gradually fell, they transitioned to making brass items like vases and Buddhist alter fittings, you see. Today, we use materials like aluminum and tin, so while we maintain the metalwork technology at the core, we are making changes in areas like materials and uses. We say the history of Takaoka Doki is 400 years long, but the technologies are still with us today only because it underwent that much change. The industry may currently be slowly weakening, but I believe that if we can keep changing in the same way, we can overcome those challenges and continue going forward. After all, we’ve done it for 400 years.

ー Are there any new endeavors that Shimatani Shoryu Kobo plans to undertake?

Shimatani：
I would like to put more effort into communicating about the orin to people overseas. I want people all over the world to hear its beautifully tuned sound, and spread the understanding that the orin is not simply a tool used in Buddhist rituals, but that it has a tone quality that provides a sense of healing and spiritual calmness. 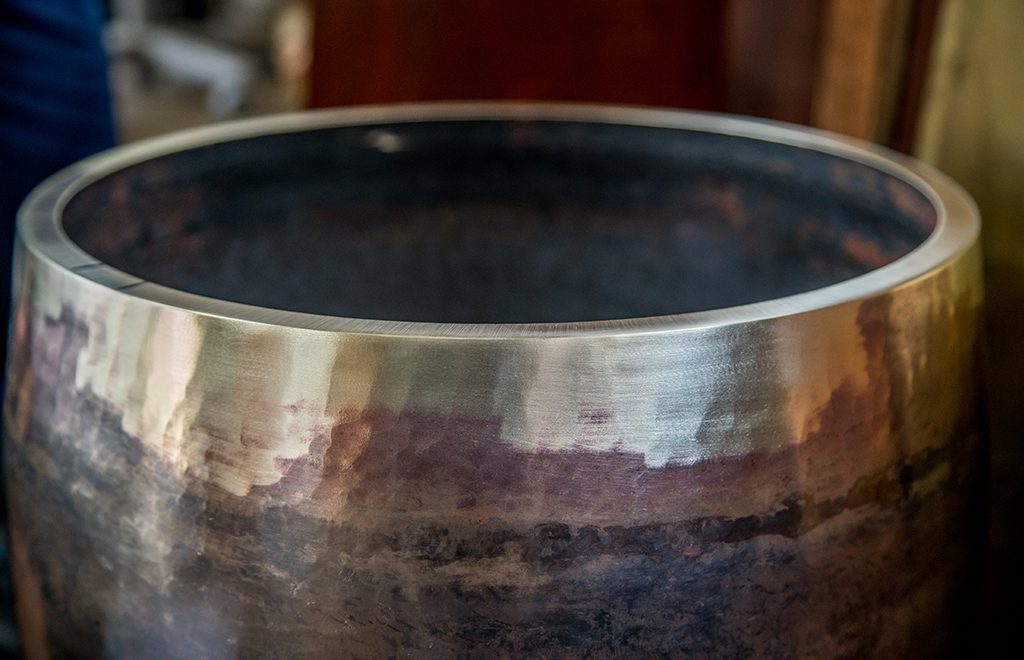 Since its founding in 1909, Shimatani Shoryu Kobo has been devoted to the making of the keisu, passing down the traditional techniques from one generation to the next exclusively through the family line. The keisu made by Shimanati Shoryu are currently being used at many temples around the country, including Eihei-ji Temple (Fukui Prefecture), Sōji-ji Temple (Kanagawa Pref.), Sōjijiso-in Temple (Ishikawa Pref.), Nanzen-ji Temple (Kyoto Pref.), and Narita-san Temple (Fukuoka Pref.).